Sadhna in Hindi implies to learn and rectify something through discipline. The senses need to be reined in so that we do not commit actions which lead to our downfall. So for this, initiation in meditation by a realized master is a prerequisite. Mastering the mind can only be done through meditation which nips the evil in the bud. The root cause of all thoughts and action is karma. Meditation cuts karmas and end suffering with immediate effect.

Unlock the key to happiness, joy and prosperity through the sacred science of Shiv Yog. Shiv Yogis take their guidance directly from sages, rishis and munis who have dedicated every breath of their body for the ascension of humanity. With their help, men and women everywhere can enjoy the divine taste of bliss resonating from the teachings.

Guru Mandala is a fraternity of such eminent personalities, who in the name of God, heal the wounded and pave their way towards the ultimate goal of human life, self-realization. As a self-realized Master himself, Dr. Avdhoot Shivanandji is a prime example of leaders who have developed extra sensory perception through persistent spiritual contemplation, rooted in the Guru Mandala.

The cornerstone of all spiritual practice is meditation. All the other aspects of worship and all other teachings are secondary to meditation. If all the seva and sankirtan are rivers, sadhna is the ocean. All these rivers lead to the ocean. At one point, all other aspects of spirituality lose their identity and merge into sadhna. Without sadhna, all facets of Shiv Yog and spirituality don’t hold much value. Sadhna is the nucleus and the rest of the practices are like the electrons revolving around it. When the Guru initiates a disciple, he bestows him with mantra and shakti. The disciple after receiving this boon performs sadhna at his end using the mantra and the shakti. As this practice becomes a routine, the karmas get burnt.

The spiritual aspirant who performs Shiv Yog sadhna daily liberates himself from the sorrow of the past while the uncertainty of the future fails to bother him. He begins to live in the present moment, becomes humble, respects everyone, feels the inner backing and support and so is supremely confident of his abilities, sees the God in everyone, achieves success in whatever task he undertakes, gains the help, respect and love of everyone and shines like a sun. Such is his charisma and positive radiance that he also stands out in the crowd. The greatest virtue of Shiv Yog sadhna is that it purifies an individual to the extent that even as he receives all the worldly comforts and pleasures, there is no attachment to them. There is no ego. The individual becomes like a fruit laden tree which bows before everyone and does not try to boss around.

As the disciple progresses on the path of Shiv Yog sadhna shown by the Guru, he finds a dramatic change in his way of thinking. Criticism, complaining, wailing, raising a hue and cry, quarrelling, arguing, listening to the vices of others, finger pointing etc. all become a thing of the past. Now there is only unconditional love, acceptance, judgmental and forgiveness. Not that he listens to anything outside or anyone tells him to steer clear of the negativity, but a risen consciousness develops an automatic dislike for the bad traits. Such a change, which is brought from within through sadhna than the outside is not only most effective but is permanently ingrained in the psyche.

Dr. Avdhoot Shivanand teaches that every human being has five bodies. They are the Physical Body, Energy Body, Mental Body, Causal Body, and Super-Causal Body.

Every human being also has seven energy centers or vortexes, known as CHAKRAS in Sanskrit:

Root Chakra (At the perineum, base of the spine),  Sacral Chakra (Just below the navel, in the genital region), Solar Plexus Chakra (In the navel area), Heart Chakra (Center of the chest), Throat Chakra (Base of the throat), Third Eye Chakra (Forehead area, between the eyebrows), Crown Chakra (Top of the head)

While gym workouts only address the physical body, the Sookshma (Subtle) Kriyas exercise the subtle bodies and help to activate the chakras through which human beings receive cosmic energy.

“Prana” is the Sanskrit term for what Dr. Shivanand calls, “LIFE FORCE ENERGY.” He has also called it BIO-ETHERIC ENERGY or BIOELECTRICITY. It is also known as COSMIC ENERGY.

The second body is called Energy Body or Pranic Body and it has a massive network of energy meridians through which cosmic energy flows. When a specific organ begins to lose access to this bio-etheric energy, its frequencies progressively go down until it ultimately manifests a disease.

“Shiv Yog Meditation is the process of merging with the source of infinite cosmic power in the Universe. By doing so, a human being can be completely cured and become healthy, whole and complete”~ Dr. Shivanand 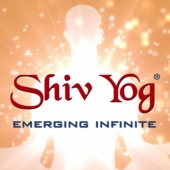 SY Music
Update Required To play the media you will need to either update your browser to a recent version or update your Flash plugin.

Shiv Yog meditation is a deep state of physical, mental, and emotional relaxation which allows an individual to access the contents of one’s subtle bodies. Through this process, one can fill all his subtle bodies with powerful cosmic energy. Every cell down to atomic and sub-atomic levels fills up with this cosmic energy resulting in raised frequencies. One can easily experience these raised frequencies through the body. A deep sense of calm, peace, and tranquility descends upon the person meditating. Past incidents of trauma may surface at the conscious level but, in this state of deep calm, one is able to simply witness the incidents without emotionally reacting to them. As the stored up intracellular memory of every such incident is released through witnessing and projection of cosmic energy, deep healing takes place.

We're not around right now. But you can send us an email and we'll get back to you, asap.